We Preview the Upcoming Harrisburg Marathon

by Jeff Paladina for Runner’s Gazette

On November 10th hundreds of runners will take their mark on Harrisburg’s Market Street Bridge, ready to traverse 26.2 miles through Pennsylvania’s capital city on a course that runs adjacent to and across the bridges of the mighty Susquehanna River.  This is the story of a 26.2-mile footrace in its 48th year, that has been passed on to the current generation of runners through the blood, sweat, and tears of the previous generation.  This the story of the thriving local running community, in particular the social media-driven running club that claims Harrisburg’s river trails as their own, which populates the race with volunteers and participants.  This is the story about the individual runners who will toe the start line, each of them carrying with them unique and powerful stories of triumph as they take on the marathon challenge.   This is the 2019 Enders Insurance Harrisburg Marathon.

The first Harrisburg Marathon was held on Labor Day in 1972.  The storied history of the race is set forth in the book Harrisburg Marathon: Four Decades of Running 26.22 Miles at Harrisburg, Pennsylvania by Hap Miller.  Miller has run the race every year since 1975.  Only Park Barner, who has run all 47 races, boasts a longer streak.  Barner, age 75, and Miller, age 78, are both registered for the 2019 event.

Today, the East Shore YMCA carries the mantle of the Harrisburg Marathon by sponsoring and directing the race.  The flat and fast course, combined with the cool November temperatures, provides an enticing option for those seeking to qualify for the Boston Marathon or set personal records.   The meticulous work of the YMCA’s race director Tom Gifford ensures a well-organized event, and the easy logistics of travel and affordable accommodations make Harrisburg a draw for runners outside the immediate area.

While the YMCA provides the organization and funding for the race, the thriving local running community provides the foot soldiers for Harrisburg’s signature running event. At the forefront of the support is an informal group organized purely on Facebook called the Harrisburg River Runners.  River Runners was started by local runners Michael Percherke and Michelle Howe in January 2011.  It originally consisted of a handful of friends.  Today, it has well over 2,000 members.   “The River Runners started as a way for people to run together, so no one would run alone,” explains Howe.  While it is not uncommon to have Facebook running groups with a large membership, what is uncommon is the real-life connection between members, many of whom know each other and run together. “To have a support system of running friends is really important.” says Howe. “I love meeting new runners and supporting each other. Cheering each other on, seeing people achieving goals, but also being there to support each other when we don’t succeed is what we are all about.” River Runners is not just a social media group.  Rather, they are a group of close friends who use social media to communicate.  And on one day in November, those friends come together to support the quintessential race that is run along the river for which the group is named.

“The Harrisburg Marathon is a favorite of the River Runners because it showcases our hometown course,” explains Howe. “We are so lucky to have such a beautiful place to run and we get to share it with local and out-of-town runners. The River Runners are active in the marathon, from running the marathon or sporting a relay team to volunteering and setting up and manning water stops, finish line details and flagging on the course on race day. River Runners will also be the biggest cheerleaders along the course, cheering on all of the runners with cowbells and signs in hand.”

One of the key River Runners volunteers for the race is Brad Garfinkel, who has led the course aid station team since 2013.  Garfinkel coordinates his team of 20 volunteers for the effort.  He rents a 27-foot truck, which he and the other volunteers load with water and other supplies for the aid stations at 5 am on race morning.  “We typically have all supplies delivered in time to be sitting at the intersection of Forster and Front Street watching the runners come off the Harvey Taylor Bridge,” says Garfinkel.   “Once the runners all pass the first three aid stations, we begin slowly taking the course down. Once the final runners pass, we pack the rest of the course up, deliver the supplies to the YMCA and call it a day. Most of our volunteers do 5-hour shifts. Myself and a few others put in a 10-11 hour day. I enjoy the experience and giving back to the runners who get to run the areas that we call home.”

River Runners will have many entrants in the race on November 10th, ranging from veteran runners to first-time marathoners.  All of these runners will have the support of the vibrant running community which they have grown to accept as second family.

This year will mark the 26th time Don Halke has run the Harrisburg Marathon.  He has either volunteered for, or run the marathon every year since 1984.  Serious medical issues have been unable to keep him from running the race that he loves.  “I was sidelined in 2009 by a mid-October heart attack,” relates Halke. “I had to have two stents and four bypasses, but returned to the Harrisburg Marathon in 2010 and I have not missed a year since –  not even in 2016, when a pacemaker was implanted in me. The Harrisburg Marathon is my home course and although I wish it had the hills in it again, it will always be my favorite.”

When Jen Cadenhead was a baby, she had a brain tumor and was given a small chance at surviving surgery. Cadenhead beat those odds and on November 10, she will run her 17th Harrisburg Marathon, a feat that unofficially places her third among women with the most Harrisburg Marathon finishes.  It is the support of her running family that keeps her going.  “The Harrisburg Marathon is special to me as it is my hometown race where I get to see so many friends either running or cheering along the course, and the atmosphere is electrifying,” says Cadenhead.  Each year, she dedicates her race to the memory of her late supervisor who passed away from colon cancer 10 years ago. “He passed away two days after the race in 2009 and he was one of my biggest supporters, so I have dedicated this race to him ever since,” says Cadenhead.

Jessica Smith, a school psychologist and mother of two, will be running her first marathon.  She has trained with local runners through the Fleet Feet Mechanicsburg training class, which has become a gateway for many new runners who enter the sport.  “I liked the idea of joining the Fleet Feet training group and getting to know other local runners who would also be running the same race,” says Smith.  “That has turned out to be so true.  I’m looking forward to both being supported by the local running community, but also cheering for those I’ve gotten to know while out on the course.”

Chris Hawk is also running his first marathon on November 10th.  A computer systems support engineer, Hawk took up running to improve his health after his father passed away from diabetes in 2016.  Hawk also trained with the Fleet Feet program, setting his sights on the Harrisburg Half Marathon in September.  It went so well that he is taking on the full marathon challenge as well.  “This is my first marathon and I am excited about running alongside friends that I run with on the weekends,” says Hawk.

Amy Meadows will run her third marathon on November 10, but her first marathon since 2006.  In between marathons, Meadows gave birth to her son and chose to stop running due to what she describes as “mommy guilt.”  Meadows overcame those feelings, and the Harrisburg Marathon will be her triumphant return to running marathons.  At one point, Meadows considered selling her bib due to injury, but through physical therapy and hard work, she will be healthy at the start line and is eager to take on the marathon challenge.  “To think that I’ve run hundreds of sweaty miles though the summer, most of them by myself, when just four months ago I couldn’t stand upright [due to the injury] is pretty amazing,” says Meadows.

Allan Rossi is a 56-year-old attorney running his third marathon on November 10.  He was inspired to run Harrisburg when he ran a leg of the Harrisburg Marathon relay in 2019.  “I remember showing up for the relay and seeing all of my running friends at the start line,” says Rossi. “I remember thinking ‘God, I feel like I have to be out there with them because I trained with them the whole time. I was thinking I’ve got do this race next year because I want to be out there with my people.’”

On Sunday November 10, in Harrisburg – a city ironically known for division along political lines – the running community will come together as one in a unified show of support for Don Halke, Jen Cadenhead, Jessica Smith, Chris Hawk, Amy Meadows, Allan Rossi and hundreds of other runners who will take on the soul-affirming experience of running a marathon.  While there will be top finishers who win the race, on this special fall day – we, the Harrisburg running community, are all winners.

Jeff Paladina is an 18-time marathoner who lives near Harrisburg, Pennsylvania with his wife Julia and four children. Jeff hails from Western Pennsylvania and he is known for his love for his family, running friends, and all things related to Pittsburgh. 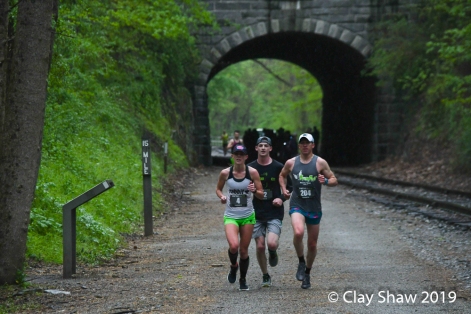 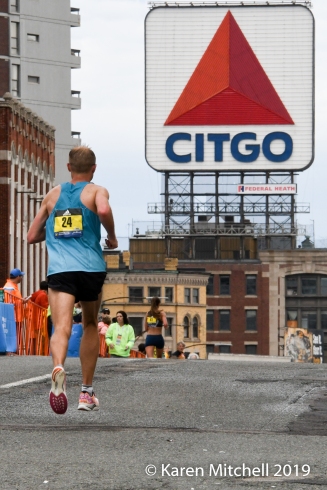 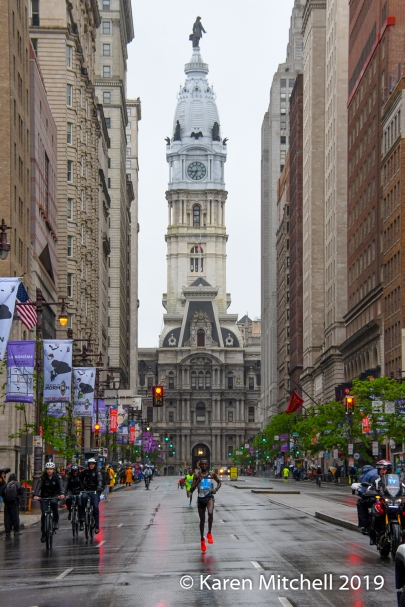 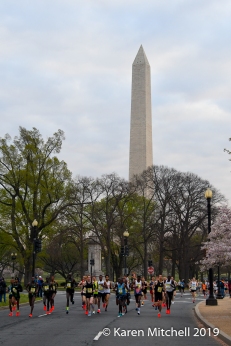 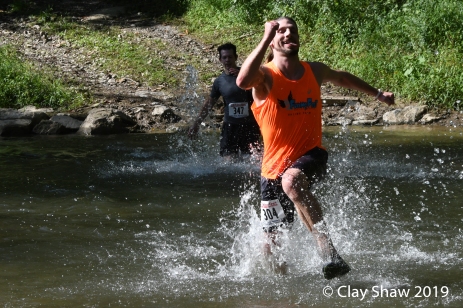 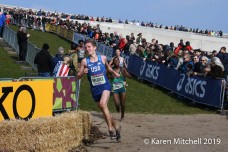 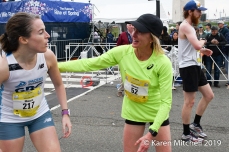 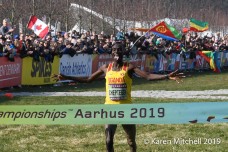